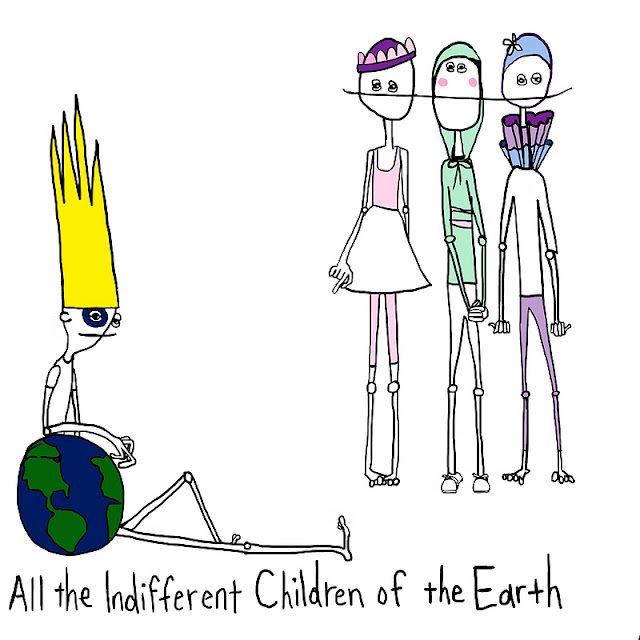 ( because your latte will give you an hour of superpowers.
no, I know this. I am high on life when I have coffee.
But if you support this show with anything. even a dollar... it can give a theater full of superpowers. that last slightly longer.)

All the Indifferent Children of the Earth is a play about existing now.  It's also very nearly a quote out of Hamlet.  It's as if the play were called: Describe Thee to a Nunnery or, To Be or Not To Do Things, Muchly.  Our rewards here are mostly goofy -- the performance is our offering, the rewards are a friendly wink and a sincere, if jocular, "thank you" -- however the play is quite serious, except when it is funny, when it becomes uber-serious.  And when we dance we are basically parallel-universe-level serious.
These projects are labors of love and compulsive need, and raising this money would take us great lengths toward creating this show.  Though we recoup some funds in the ticketing process, theater is a money-losing venture.  A week of rehearsals is at least a hundred bucks right there.  A little money goes a long way.  Basically it keeps the loss from becoming prohibitive and keeps people from waking up in a panic in the middle of the night.  It also keeps theater going, which we absolutely must do lest we let Aeschylus and Sophocles down, who began the whole thing if you subscribe to a brutal,hegemonic,Western-centric model of history that explicates humanity's inexorable, atomic progress.
The Old Kent Road Theater has been making plays for at least five years now that are primarily about human beings relating to one another today.  Hopefully the way we make the play offers new perspectives or something unusual to like or dislike.  We'd like to inspire a sense of play, a sense of freedom, and sense of the new.
All the Indifferent Children of the Earth will have video in it, movement, sculpture-arts, dialogue, monologue, music, and lights.  The action finds three women and one man compulsively dissecting the beauty and the monotony and the horror of life.  It’s as if four anxious, petit bourgeois strangers found themselves at 8am in the backyard of a mutual friend’s August retreat, a half-mile from the coast outside of Cherbourg or Seattle.  Or it’s as if four precocious children were abandoned in a Math/Science Center on a rainy, late-autumn Saturday morning.  Or as if people do theater, in 2012, despite…the world.
Cast: Sarah Dahlen as Sarah, Daniel Kublick as Daniel, Kathleen Heverin as Kat, & Hollis Witherspoon as Hollis.
Light Design: Morgan Anne Zipf; Sculpture-Arts/Illustration: Abernathy Bland.
Video Design & Video Direction: Asa Gauen; Text & Direction:  Eric Bland.
PERFORMANCES: Thu/Fri/Sat at 8pm, Feb 16/17/18; 23/24/25; Mar 1/2/3.
WHERE: The Brick Theater.  575 Metropolitan Avenue, Brooklyn NY 11211 (between Union Avenue and Lorimer Street)  http://bricktheater.com/
Tickets are $18.